May you live in interesting times

Supposedly derived from a Chinese proverb, this has often been quoted when referencing periods of history where there was momentous change and sometimes chaos. Though the origin of the saying is hard to source, the intended meaning is equally as difficult to determine, with some referencing it as a blessing, and others, a curse. Our recent lived history has been nothing if not interesting. A global pandemic, geopolitical tension and war, spiking inflation, destabilising power structures, climate crisis, and lives lived in an acceleratingly digital dimension, may lead some to think that this generation must have had it worse than those that came before it.

The early 2020s will indeed have a significant section in the history books and will be an arduous read for many, but does our perspective as spectators living through a period in time cloud our judgment as to the severity of the situation at hand? And as investors, either well versed or new to the game, how do we endeavour to keep any perspective on long-term financial goals when things seem in such disarray over the short-term and we grapple with volatility?

This is not to undermine in any shape or form the horrific conflict taking place in Ukraine or make light of the situation in that country or any other events causing harm and hardship. We are also coming from the perspective of a relatively privileged position, living in a relatively safe environment, in a Western context. This is simply to assess what crises other generations were faced with, how they moved through them, and as investors, how do we keep our nerve when it feels like things are crumbling around us and the uncertainty can become paralysing.

Race to the bottom

Each generation stakes a claim that their era had it worse off. Anyone who’s heard themselves echoing the phrase “back in my day..” will agree that although we have a strong nostalgia for the era in which we were born, we also tend to feel that we have been dealt a more difficult hand than those that came before us and certainly had it harder than those that will follow. But how does that theory stack up? Of course, it’s impossible to measure, with no clear metric with which to judge it and such a vast array of personal experiences depending on a multitude of factors so as with any generational comment, we are very much generalising in our assessments.

Crises of the past

The baby boomers (born 1946 – 1964) were born into a time of post-war optimism and prosperity. Dramatic social change took place during this period and for those who began their careers and building wealth, the majority have reaped the benefits of a time of extreme growth. The Cold War and civil rights movements were taking place at this time and it was a period of huge social change. Though indeed synonymous with growth, there were also multiple recessionary periods this generation faced, most notably the 1970s oil crisis, which lead to a quadrupling of oil prices by the OPEC (Organization of the Petroleum Exporting Countries) embargo, coupled with the 1973–1974 stock market crash leading to a stagflation and high unemployment recession in the US. This was considered the worst economic period since The Great Depression, and though there was a further energy crisis a few years after, the Fed managed to bring down the temperature at the time by lowering rates and resultingly The Misery Index (Fig. 1) dropped in the US & UK (where we have available data). Despite these periods of uncertainty, if you were lucky enough to have begun your investment journey during this period, you would have witnessed a steady accumulation of wealth over time.

Next came Generation X (1965-1980), sometimes described as the forgotten generation. Those born during this period would have lived through two recessions before they reached adolescence. One in the early 1980s and the other in the early 1990s. Both were tackled by policy makers intervention and eventually in the 1990s prosperity commenced again. Millennials (1981-1996) followed, who having been doted on by their boomer helicopter parents, faced multiple upheavals, such as 9/11 and the Global Financial Crisis. Entering the job market during a recession and resultingly facing lower earnings, wealth, and delayed milestones, The Misery Index soared, particularly in Ireland where the effects were particularly acute.

The Gen Z (born 1996-2010) are coming of age in the midst of this period of extreme uncertainty. Already considered the “new cursed generation” following their predecessors, the key difference however is that at least millennials got to experience a relatively prosperous, non-dystopian childhood. The COVID-19 recession was said to hit this cohort disproportionately, with job prospects dashed as they begin their careers and an era of peak inflation as they begin to create and build wealth. That’s not to mention the ongoing climate crisis and the fourth industrial revolution that’s taking place, tearing up the traditional blueprint of lives being mapped out with milestones, the mainstream 9-5 work week is becoming a thing of the past, enabled by technology and automation and artificial intelligence (AI) leading to the elimination of many career paths. With a war now waging in Europe and the instability it brings, Gen Z certainly have much to contend with and The Misery Index reflects this.

Reasons to be (cautiously) optimistic

Firstly, humanity is resilient, we only have to look at the global response to the war in Ukraine. Widespread protests against the war have taken place and support and welcome has been offered to refugees streaming out of their war-torn country. Community support and solidarity has also been exemplary throughout COVID-19. In the investing context, portfolios are also resilient, if they are built with sufficient diversification as they are in Davy. In fact, the stock markets seem to have already looked past all that the world and the economy is grappling with.

Unfortunately, there will always be chaos & misery in the world, and markets will always react to it. No previous or future generation can avoid that fact. During any crisis, it can seem like the situation has permanence. Perspective only arrives after the crisis. The proximity of the war beginning as lockdown eased meant that there was no time for relief. We may feel as though things have been going from bad to worse, when it comes to investing, we are looking at where to turn. Though crisis will inevitably make us more risk-averse, we can’t let the fear factor undermine our and the market's potential for resilience. 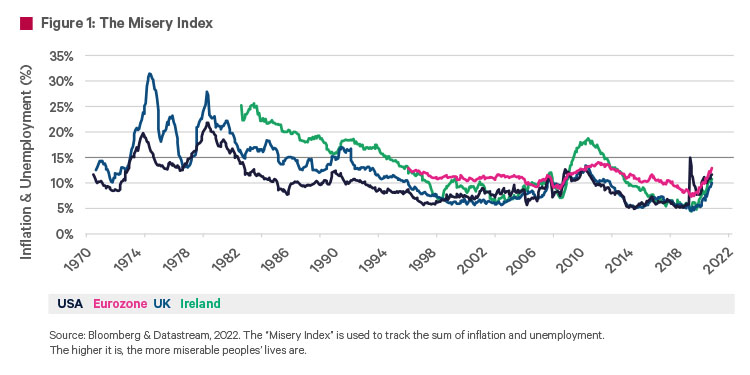