After almost two years of a raging post-COVID-19 rally, the stock market has finally seen a correction (a price decline of 10%). While the tragic events in Ukraine have not helped, what has really unsettled investors is the recognition that higher interest rates are coming, and sooner than we previously expected. Tighter monetary policy has often been the precursor to recessions and bear markets (declines of 20% or more). So, how worried should we be this time?

Looking at the historical record in Figure 1 below, we see that not all rate hike cycles have led to recessions or bear markets, at least not for several years. Of course, not all hiking cycles are the same. They vary widely by speed and size, whether they were expected or not, and what was the macro environment at the time. Most importantly, rate rises don’t cause bear markets, recessions do.

Firstly, we are starting from an unusually low interest rate. The 3% (approx) of hikes that the Federal Reserve (the Fed) now projects would still only bring us to a low level by historical standards, and after inflation, the real rate would still be negative or close to zero. Also, governments have taken a more active role recently in supporting the economy, and so, overall conditions will still be highly accommodative.

On the downside, while interest rates have been on a downward trend since the 1980s, debt levels have risen significantly. Household and bank debt are much lower than before the GFC (Global Financial Crisis), but government debt and corporate debt are near all-time highs. Central banks are well aware of the potential impact of higher rates, and we expect them to tread carefully. 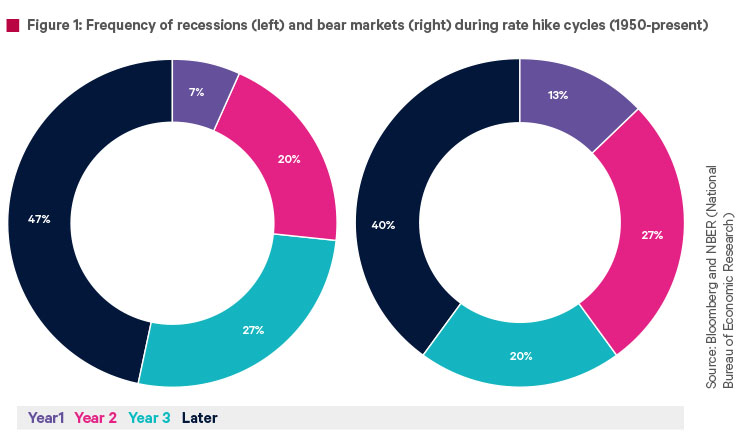 Finally, inflation, at almost 8% in the US, its highest level since the early 1980s, is all about supply and demand. Central banks can cool down an overheating economy by tightening policy but can do little for supply shortages. The post-COVID-19 rebound of 2020-21 saw a huge resurgence in demand, but the real problem has been broken supply chains and now the war in Ukraine. Higher interest rates will not replace lost supplies, missing workers, or Russian energy, but with inflation at these levels the Fed must act to avoid losing credibility, despite the uncertainty of the war.

Will Europe be different to the United States?

We focus on the US because it has the biggest economy, with the most powerful central bank, whose monetary policy usually provides the global lead. This time, the ECB (European Central Bank) may be slower to follow than usual. The US economy will see little impact from isolating Russia, whereas the Eurozone is heavily dependent on their energy. Indeed, core inflation in the Eurozone is only 2.7%, indicating much less over-heating. With war on its doorstep, the ECB will be more cautious in raising their main deposit rate, which may remain below zero into 2023.

The situation in the UK is closer to the US, but potentially worse. Less exposed to Russia than the Eurozone, but still vulnerable to gas prices, post Brexit UK also faces supply constraints of its own making, reflected in the highest core inflation in Western Europe. Therefore, the Bank of England has taken the lead in raising rates, and is expected to keep pace with the Fed this year, despite the UK economy suffering more fiscal damage from COVID-19 than most.

What does this mean for investors?

Cash: Higher interest rates should make cash more attractive, but rates are still likely to remain below inflation for years to come, especially in euro, meaning cash will continue to lose its real value.

Bonds: Long-term bond yields have already risen by over 1% in the past six months, causing bond returns to suffer their worst start to a year in over 40 years. Now with the damage done, and some yield cushion in place, it might be tempting for investors to look at bonds again. We caution that yields may yet rise further, and even at these higher levels, will likely remain below inflation for some time.

Currencies: In the long run, currencies from higher inflation economies depreciate as they lose their spending power faster. In the shorter term investors are attracted to higher yielding currencies, even though these yields may be a reflection of higher inflation. The US dollar, with its higher inflation and rate prospects, is also the world’s reserve currency and safe haven in times of crisis. As fears recede and other central banks raise rates, the US dollar may give back some of its recent gains. 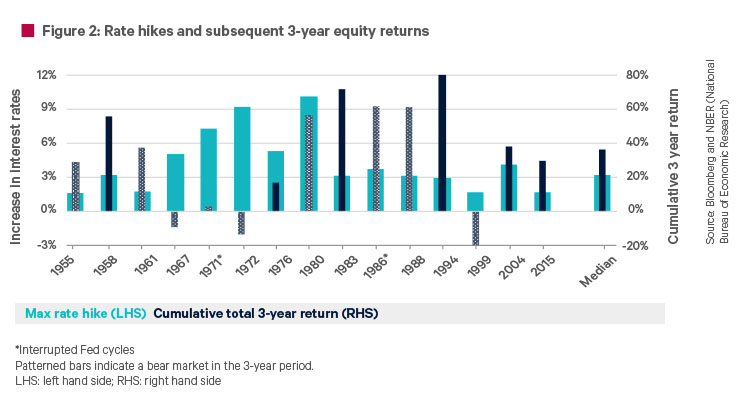 Equities: The stock market’s mood is usually driven by prospects for corporate profits, and so the macroeconomic conditions around rate increases can be more important than the interest rates themselves. Raising rates in a strong economy can be a vote of confidence, leading to higher markets, whereas hiking aggressively to stop inflation can seem desperate and scare investors away.

Figure 2 shows the historical performance of the S&P 500 index, since 1950, for the three years following the start of each Fed cycle. We see that markets generally did well as rates rose. The median return of 37% even includes several bear markets. However, there were episodes where rate hikes were followed by flat or even negative three-year returns. These were almost all in the high inflation period of the 1970s, with their aggressive interest rate policies.

Looking beneath the market surface to the sector level, we find more differentiation. Defensive sectors, such as healthcare or staples, tended to out-perform as rates rose, while cyclicals, such as technology and materials, did worse. The cyclical exceptions were financials, which tended to benefit from rising rates, and energy stocks, which did well in fast or high inflation cycles when energy prices were causing the inflation.

Commodities: Unless central banks tighten the economy into a recession, demand will not be the issue for most commodities. Physical and political supply constraints, which will not be solved by higher rates, will continue to drive the price of energy and some metals. The exception is gold, whose price tends to move inversely to real yields. As rates rise and inflation eventually cools off, this could put gold under downward pressure.

Nothing to worry about then?

Unfortunately, there’s always something to worry about. In the near term, the uncertainty around Russia-Ukraine and the potential energy crisis leaves central banks in a difficult position. As the outlook keeps shifting, they will come under pressure to speed up or slow down their policies. If they surprise the markets or lose their confidence, we could see disruption to the major indices.

Over the longer horizon, the market is only pricing in a relatively small amount of tightening. If this really is to be a decade of above-target inflation, then the bond market will have to change its expectations for 2024 and beyond. This realisation may cause further disruption in the economy and stock market. Industries whose growth expectations and high valuations rely on rock-bottom rates and weak wage growth may find the road ahead more challenging. However, we don’t believe that this is a reason to exit the stock market, but instead a reason to be more selective in what you own.