At Davy, we build discretionary portfolios in several stages. Firstly, for each risk level, we design the strategic asset allocation i.e. the mix of assets that we intend to hold over the long-term. Next, we select the instruments to implement our allocation plan. Depending on the mandate, these can include direct securities, passive index trackers, or active fund managers. Finally, we add tactical asset allocations, which are short-term deviations from the long-term plan, based on our outlook over the next twelve months.

It is important to have realistic expectations for tactical allocation. Ideally, it’s about seeking out dislocations in the markets that create investment opportunities. Sometimes, these are large and obvious, like when the stock market drops over 30% due to COVID-19, but usually they are more niche in nature. Most importantly, tactical allocation should not be about trying to time in and out of the market.

Since the COVID-19 bear market in 2020, there have been some dislocations, but they have all been driven by the same thing – the strength of the recovery and its consequences for inflation and central bank policy. This led to our over-weights in pro-cyclical equities, and our underweight and short-duration positioning in bonds. But diversification is key in portfolio construction and we are always on the lookout for unrelated opportunities. We believe that the stress in the Chinese property sector has created one in the Asian high yield (“HY”) bond market, and this article outlines how we are gaining exposure to it in our discretionary portfolios. 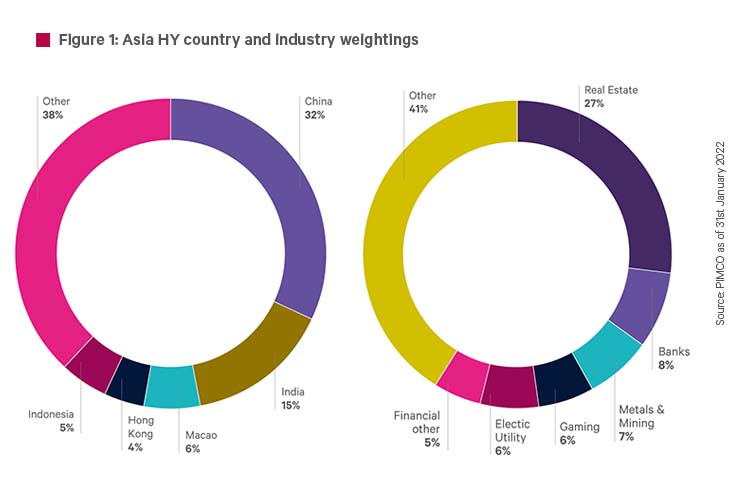 Firstly, an important distinction – our area of focus is the offshore market, where the bonds are issued in US dollars (USD), and not the onshore bonds that are issued in local Asian currencies. So the risk we are assessing is the credit risk of the issuers and not the currency risk of the countries.

From a geographical perspective, we see in Figure 1 (based of PIMCO’s GIS Asia High Yield Bond Fund) that Asia HY is dominated by Chinese corporate issuers, who make up almost one third of the geographic exposure, while India is the second largest region (15%). At the industry level, real estate is the largest sector, at close to 27%, followed by banks (8%) and metals and mining companies (7%). Overall, Asia HY investors are getting roughly 21% exposure to Chinese real estate.

The yield of a corporate bond represents the cost for the issuer to borrow in the bond market. To compensate for the greater chance of default, riskier issuers generally must pay a higher yield to borrow compared to a superior quality investment grade (“IG”) issuer. Figure 2 shows the historical yield of the Bloomberg Asia ex-Japan High Yield USD Index. In late March, it traded at an unusually high yield of 15.9%. This compares to 4.4% and 6.0% for Euro and US HY markets (in EUR and USD respectively).

The Asia HY market has rarely traded at such extreme levels in it's history; the only previous occasions were during the sovereign debt crisis in 2011 and the COVID-19 crisis in 2020. We believe that the market is pricing in an excessive level of expected defaults, and represents an investment opportunity. But how did we get here? At the beginning of 2021, the market was trading at a yield of 6.5%. What has caused the dramatic increase in yield and fall in price? (a bond’s price and yield move in opposite directions).

To understand what has been driving Asia HY yields higher, it is helpful to look at developments in China and in particular the real estate sector there.

The Chinese government, recognising these dangerous trends, announced that debt reduction would be one of its five major tasks in 2021. More specific details emerged in the form of their “three red lines” policies. These policies, which focus on leverage and liquidity levels, were designed to curtail the build-up of debt in the real estate sector, and to improve its financial strength via strict deleveraging criteria.

It quickly became apparent that the Chinese government was walking a difficult and narrow path – trying to tackle deep structural problems in the real estate sector, whilst avoiding a hard landing that could derail their ambitious economic targets. The potential impact of the tighter policies unnerved bond investors. From the beginning of July 2021 to the end of the year, the Bloomberg Asia and China HY USD indices lost 15.4% and 25.1% respectively (Figure 3). After much speculation, Evergrande Group and Kaisa Group Holdings Ltd, two of China’s largest housing developers, both defaulted on bond repayments in December 2021, confirming market fears. 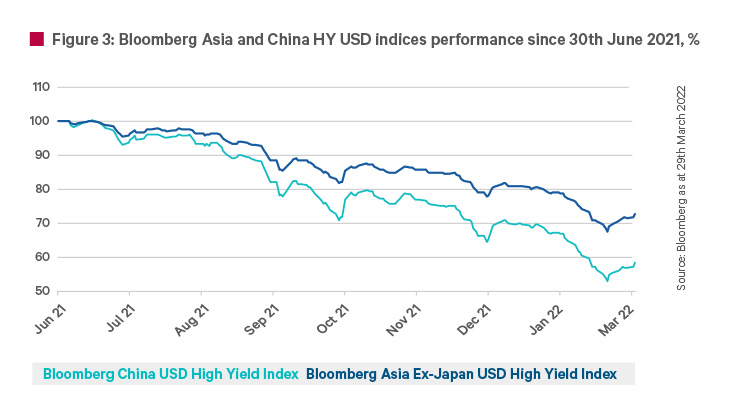 2022 poses to be another challenging year for Chinese real estate developers, with US $117 billion of developers’ debt maturing in the year ($36 billion of this denominated in US dollars). As developers try to sell assets to raise the necessary cash, default-related headlines will continue in the months to come. On speaking with local experts, we expect further bouts of volatility in the market, particularly during the first half of 2022, before conditions stabilise and eventually recover.

On a more positive note, recent indications suggest that policy is reaching an inflection point, and gradually turning more supportive. The government is understandably keen to avoid a credit crisis, and with President Xi anticipating an extension to his leadership at the 20th Party Congress later this year, we may be approaching a limit to the disruption that will be tolerated. Recent announcements include cuts to the central bank of China’s key interest rate, easing of borrowing limits for property firms using the funds for mergers and acquisitions, and new rules making it easier for developers to access funds from sales that are held in escrow accounts. Although, we do not anticipate a return to the aggressive easing seen in previous periods of difficulty, we do expect further policy tweaking to ease pressure on the sector.

How is Davy getting exposure to Asian HY bond market?

Given the risk and opacity in the Chinese HY bond market, our implementation approach is key. Firstly, we decided to invest in the broader Asian HY market to reduce concentration risk. Secondly, rather than simply buying the index, we opted for an active manager with strong local expertise to better navigate the turbulent environment. Specifically, we chose PIMCO’s GIS Asia High Yield Bond Fund. With dispersion amongst Chinese real estate issuers so high, the credit selection and risk management abilities of PIMCO fund managers should be especially beneficial.

A third important point is that the managers at PIMCO favour higher quality issuers, particularly those positioned to benefit from expected policy tweaking. This means that many of the highest yielding issuers, with a greater chance of default,are not held within the fund. As a result, the yield-to-worst (measure of the lowest possible yield) on the fund (10.0% at the end of February) is lower than the yield of the Bloomberg index. By reducing exposure to defaults, rather than chasing the highest yields, we expect the fund to generate a superior total return. And of course, we limit the risk by limiting the size of our allocation.

We recognise that Asian HY is not a familiar asset class for most European investors, and may bring different risks than we are used to, so we intend to tread carefully. The Chinese government has a difficult job to do to re-balance their economy without disrupting it. But in this environment of elevated risk and lower return prospects, we are keen to find diversification opportunities that do not move to the same risk-on / risk-off rhythm as everything else. We will keep a close watch on this investment and adjust our allocation if and when appropriate.

WARNING: Forecasts are not a reliable indicator of future performance.

Private equity - The state of play