One of the drawbacks of the investment industry over the last three decades has been its constant desire to classify or pigeonhole every investor into an ever-increasing array of boxes. The upshot of the proliferation of style or factor analysis means that when it comes to describing how you invest money you almost become like a Gen-Z in a Starbucks ordering coffee – anyone for an iced, ristretto, ten shot, venti, with breve, five pump vanilla, seven-pump caramel, four Splenda, (and) poured, not shaken?

Yet stripping aside the marketing parlance, at the core, aside from the obvious size classification – large, mid, or small capitalisation – there is a strong case to be made that equity returns are ultimately guided by earnings (economic cycles and profitability) and valuation multiples (financial conditions/central bank measures) over the long-term. And while people will point to other factors, not least of all and pertinent in the current environment, geopolitics, many of these will drive “event risk” in the market for a period of time, rather than being a long-term fundamental factor.

Two sides of the one coin

When I began working in this industry nearly 30 years ago, things were simpler. Investors were categorised as being “growth” or “value” investors - with the major defining feature being the weight the investor places on each of the two factors in their investment decision: growth investors on earnings momentum; value investors on valuation.

In reality, these factors are not independent of each other and must be looked at in conjunction when assessing any investment. They are best viewed as two sides of the same coin – just because a share is at a low valuation does not make it a good investment if the fundamentals of the company are in serious decline. Likewise, if a high-growth company is trading on a very elevated valuation, the share price may already reflect the good “story” of the company.

The interplay between earnings growth and changes in valuation are key to driving returns of a stock market on a year-to-year basis. By deconstructing these yearly returns, the contribution of both factors can be analysed and as Figure 1 below demonstrates, the magnitude and direction of each factor can change significantly, even when the overall market return may be muted.

The trend is your friend

Whilst either growth or value can have an impact on returns in any one year, it may be a surprise to hear that the dominance of growth or value as a style of investing tends to be a multi-year phenomenon rather than swinging hot and cold year over year. This is probably best evidenced by Figure 2 below which shows the relative performance between the two over time.

It might seem counterintuitive to say that even though both elements combine every year to generate returns, you can have long periods where one style is dominant over the other. Yet, if you look at Figure 1 and Figure 2 side by side, you can see the strong outperformance of growth in the last decade. This came when the growth component of each yearly return was the predominant contributor to returns for that year – a noticeable exception being the year 2020.

It’s fair to say that since the Global Financial Crisis, we have witnessed a golden age for growth investing at the aggregate level. However, a key point here is “at the aggregate level” – this can be somewhat misleading in that it is not true to say that companies classified as "value" have not done well over this period. The fact that many of the companies in the “growth” cohort are the mega capitalised global names will have had a disproportionate impact on the overall, by dent of their size as well as their share price performance.

And while this has played a part in the scale of the outperformance, the forces behind it would have given the same directional result regardless. To this end, it is hard to deny that the combination of ultra-low interest rates, central bank activities (Quantitative Easing), and government fiscal expenditure has created a near "Goldilocks environment", protecting or driving economic growth while inflation has remained subdued. Or so we thought… 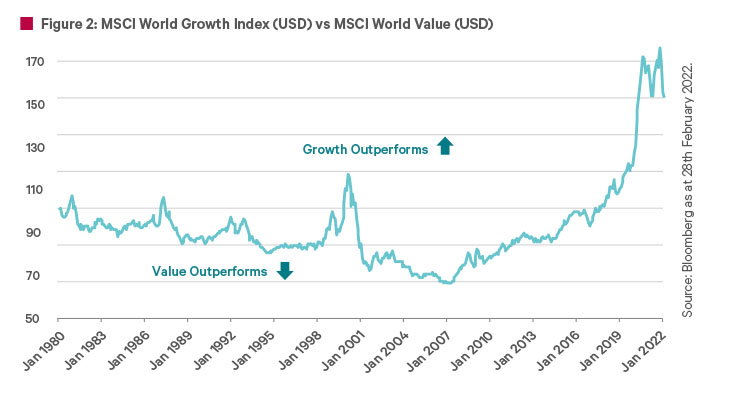 There’s inflation Jim, but not as we know it!

Since early September 2021, we have started to see the relative performance pendulum swing back towards value. To be clear, this change in relative fortunes has more to do with the growth segment selling off than any marked rally in value index, but again the devil is in the detail. The sell-off in growth began with the steady move higher in bond yields – firstly due to rising inflation forecasts and then due to real (inflation adjusted) yields also moving higher.

By their nature, much of the “intrinsic value” of high-growth companies lies out in the future – and in some cases very far out in the future. Therefore, as bond yields rise, those future cashflows are worth less when discounted back in “today’s money”, and the share price falls. To be fair, there have been some areas of the market, traditionally labelled as "value", that are benefiting from higher bond yields and have therefore rallied, but for the most part this has been about “pain” in the growth segment.

Growth vs Value – what it isn’t

While it is important to know what the labels of growth and value mean, it is equally important to know what they are not – a classification of quality. Many people make the incorrect assumption that "growth" is synonymous with high quality and “value” with low quality. Again, this is almost a natural by-product of the industry’s increasing desire to pigeonhole investors who are coming through the golden age for growth. As rather than being causal in nature, the performance of high quality and growth has been more coincidental over the last 15 years.

High-quality companies can move between the growth and value camps multiple times over the course of their life cycle as they mature or reinvent themselves. So, for long-term investors, the most important “constant” should be sticking to the quality end of the spectrum, which tends to be less influenced by the whims of the market, and diversifying across the growth and value spectrum as required.

As the “style” landscape becomes ever more complex, it can be difficult for investors as they are faced with a plethora of labels and classifications, to know exactly what they are trying to achieve. Sometimes, it is best to take it back to the core principles, in just the same way as it is nice to go into Starbucks and order an Americano.

Global equities - Where could it all go wrong?