The changing tides of investing

It’s over half a year now since European governments first shut down their economies to halt the spread of Covid-19. We successfully got the infection and death rates down to much lower levels, but at a severe cost to peoples’ businesses, jobs and lives. At the time of writing, we are seeing another surge in virus numbers, but we don’t expect the same extreme response.

Where is the economy now?

Official numbers for the second quarter showed record economic contractions around the world, ranging from -9% for the United States to -10% for Germany and -20% for the UK. Only China, which was hit and recovered earlier, showed positive growth for Q2. We expect these numbers to bounce back sharply for Q3, but for the level to still be well below end-2019 levels. Monthly business surveys, which are forward-looking, also showed record declines in March and April, then record upward bounces in May and June as lockdowns were eased. They have since stalled in Q3. 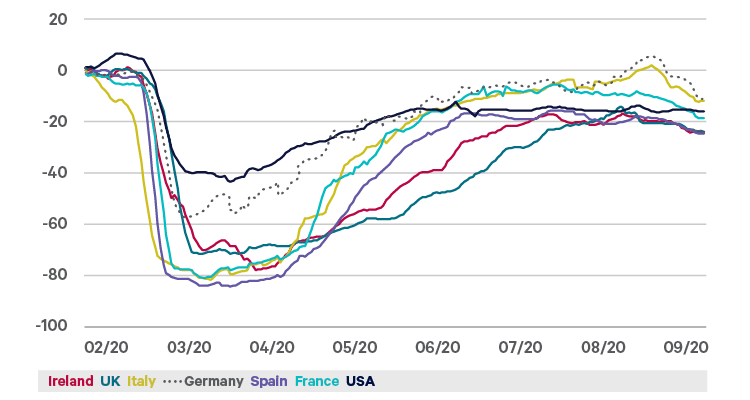 Source: data sourced from Apple & Google; as at 30th September 2020

Perhaps the most interesting data came from a new source – mobility data from Apple and Google. This shows us that life for consumers has returned to 80-90% of levels from before the virus. Given the ongoing safety constraints, this is not surprising. It’s also an indication of what we can expect until there is a vaccine solution.

Why the dislocation between the economy and the market?

At the end of September, the MSCI World (in EUR) was down 3% for 2020, while the main index in the US, the S&P 500, was up 5.6%. A natural question is how can the stock market be up when the economy is so far down? It’s worth noting that most stock markets and sectors are not up on the year, and the overall index has been dragged up by a small number of very big US technology companies. For example, at the end of August, Apple alone was valued at more than the entire FTSE 100 index.

The main reason why stocks can be strong while the economy is weak is that they are based on expectations for the future, not today. Everybody

knows that 2020 is a write-off, but enough are willing to believe that activity and earnings will be back  close to normal by the second half of 2021. Analysts will be following H2 reports closely to see how well jobs, spending and company profits are rebounding, and how sustainable this is into next year.

Where are we in the cycle(s)?

As mentioned earlier, monthly business surveys indicate that the European and US economies started to expand again in the summer, although this was from a very weakened level. Looking at unemployment and inflation levels, we see that the business cycle is still running cold, in the very early stages of a recovery. More lockdowns in response to a winter virus surge may slow this expansion. On a more positive note, China has returned to growth, and this may boost more cyclical sectors.

While private credit was not the problem this time, central banks showed that they had learned from 2008 by stepping in immediately to support the financial system. As temporary government

stimulus fades, there will be more bankruptcies and defaults. However, lower levels of initial leverage, and continued central bank support, mean that the credit cycle endures. We will continue to watch what increased borrowing and weaker earnings do to corporate creditworthiness.

The sharp rise in prices alongside the sharp drop in profits makes the stock market look very expensive on a near-term basis. Looking at longer-term earnings, we find that the market is indeed running at expensive levels, particularly in the US, and to a lesser extent in Europe. China, where the stock market surged in Q3, is also expensive by historical standards. So while the global business cycle remains cold, the market cycle is already running hot.

What about all the risks?

Most conversations that we have with clients these days end up focusing on the many dangerous uncertainties in the current environment. See the  next page for a summary of the main issues. At the risk of sounding complacent, we would counter that there are always uncertainties in investing, but we don’t usually pay them as much attention as we do at the moment.

Therefore, on a tactical basis, we are more inclined to add risk than reduce.

The two most serious issues

There are however two serious long-term issues that deserve attention. The first is the risk that the extraordinary amounts of central bank and government stimulus eventually leak into consumer prices and inflation takes off. The US Federal Reserve chairman, Jay Powell, has recently said that they will tolerate inflation above their 2% target for some time to balance out the years of below-target inflation.

Given the weakness and slack in the world economy, it will likely take several years to achieve higher nflation, but whenever it does happen, it remains to be seen if policymakers have the ability and the public support to keep it under control.

The more immediate issue is the height of market valuations. It is normal for stock markets to race ahead of the economy in recovery periods. We can question whether the recovery will be as solid or as soon as is hoped for, but the real issue is whether the current price is too high relative to the eventual growth. Now this doesn’t mean that we shouldn’t be invested, just that we should expect lower returns. We are exploring lower-priced sectors of the market, but tactical allocation alone cannot solve the long- term return problem.

Normally this return outlook would be a reason to reduce our strategic equity allocation. But the prospect of no returns from cash or bonds for years to come means that stocks, even at these high prices, remain our preferred asset class, and we are looking to increase portfolio risk levels. Therefore, we encourage our clients to look again at their financial plans, to see whether they have enough liquidity for their shorter-term needs, and enough investment risk to achieve their long-term growth objectives.

This article is from our October 2020 edition of MarketWatch.

This article is from our October 2020 edition of MarketWatch.