Ireland’s economy has continued to perform in 2018. Although GDP growth of 9% in the first half of the year is overstated by distortions in the multinational sector – specifically, the profits of technology companies resident in Ireland and a surge in pharmaceutical exports – there is no denying improvement in the underlying economy.

Retail sales volumes increased 4% in 2018, goods exports by 12% and tax revenues by 7%. Employment is expected to grow by 3% in 2018, with the unemployment rate falling to 5.3% in November. Moreover, net inward migration was 34,000 in the 12 months to April 2018 as former emigrants returned home to take up employment. The population now stands at a fresh high of 4.9 million, growing by 64,500 in the past year.

Looking ahead into 2019, the obvious concern is Brexit. At the time of writing it remains unclear whether Prime Minister Theresa May will get enough support to pass the European Union (EU) Withdrawal Bill. And speculation on a leadership challenge, general election or people’s vote continues.

Irrespective of the political theatre we believe whoever is UK prime minister will be forced to maintain the status quo, either by extending Article 50 or moving into the transition period. A ‘no-deal’ Brexit is not a realistic option. The UK has yet to establish its own single country membership of the World Trade Organisation (WTO). Also, it has not ‘rolled over’ existing EU trade agreements with the rest of the world. So the UK’s entire export sector would be at risk, not only trade with EU countries.

Figure 1: Number of immigrants versus emigrants to Ireland over the past 10 years - including Irish Nationals 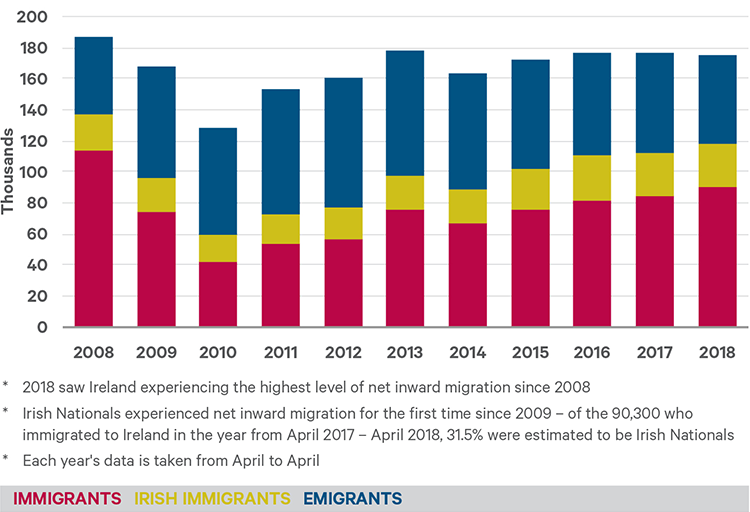 It is not too late for parliament to pass legislation that would mitigate the worst eff ects of a ‘no-deal’ Brexit. The UK government had indicated it would legislate to recognise EU standards across a range of sectors – reducing the disruption from a cliff -edge Brexit – and seek reciprocal action from the EU. However, it is now too late for these steps to be taken ahead of the March 29th deadline.

When will the government run a surplus?

The Irish government received harsh criticism from the Irish Fiscal Advisory Council (IFAC) this year. Despite the fact the budget will probably be in surplus in 2018 for the first time in over a decade. However, IFAC and the Central Bank of Ireland, amongst other institutions, have argued Ireland should be running substantial budget surpluses to insure against the next downturn and to help Ireland’s still strained government debt position.

The improvement in Ireland’s fiscal position has almost entirely been a result of buoyant corporation tax receipts. This is an unstable platform to launch a sharp rise in spending from as it is reliant on a small number of technology and pharmaceutical multinationals. Moreover, there is growing concern that expenditure discipline is being eroded, especially on health spending where the budget overrun in 2018 will be close to €700m. The Irish government may like to characterise Budget 2019 as prudent. However, the planned 6% increase in spending can hardly be described as cautious

In September, annual house price inflation slowed to 8% nationally, and 6% in Dublin. It is clear that stretched aff ordability coupled with the Central Bank mortgage lending rules is starting to cool the market. During the summer the average mortgage for a house purchase in Ireland was €227,500, the highest level since 2009, but up only 2.9% on the year. Banks are not facilitating homebuyers increasing their mortgage levels in order to chase the housing market.

In 2019 Irish banks will be able to make new exemptions to the 3.5x loan-to-income threshold to home buyers. So we expect the housing market to regain momentum early in the new year, as long as the uncertainties from Brexit are resolved. However, the real issues holding back supply include, poor planning, a lack of development land and other bottlenecks, will continue to slow construction activity.

This article is from our latest edition of MarketWatch.

WARNING: Past performance is not a reliable guide to future performance.

This article is from our latest edition of MarketWatch.

Irish Outlook How will the Irish Economy perform in 2019?

Ireland’s economy has continued to perform in 2018. Although GDP growth of 9% in the first half of the year is overstated by distortions in the multinational sector – specifically, the profits of technology companies resident in Ireland and a surge in pharmaceutical exports – there is no denying improvement in the underlying economy.

What can investors expect in 2019?

UK Outlook: Beyond the Brexit stalemate

Healthcare: It’s all about the demography