It's time to consider investing in private markets

Published in The Sunday Times on December 19th 2021

You may have seen the recent coverage of the initial public offering (IPO) of Rivian Automotive, the electric vehicle (EV) company specialising in SUVs and pickup trucks. Its stock debuted on November 10th this year and closed the day trading at $100.73 per share, giving the company a valuation of approximately $86 billion. That's more than the market capitalisation of Ford, one of Rivian's major financial backers.

There are two extraordinary things about this IPO. One is the valuation; until the quarterly period ended September 30th 2021, the company had not produced or delivered a single vehicle. In September, the company estimated revenues from the 12 vehicles it sold, to be less than $1 million for the quarter. Its net loss for the quarter was between $1.2 billion and $1.3 billion. Valuation multiples are clearly meaningless, but it is nonetheless interesting the price investors are willing to place on a pre-revenue company, never mind pre-profit.

The second extraordinary thing about Rivian’s public market offering, was how long it took to happen. The company was founded in 2009. It has managed to tap private pools of capital to fund its growth for the entire 12 years. To varying degrees, those private investors have enjoyed extraordinary returns - Ford’s $500m investment in 2019 is now worth in excess of $10bn.

A counterfactual question is worth asking - what would Rivian be worth today if it had tapped public markets for capital earlier in its existence. One things for sure, the growth that’s transpired in the interim would have accrued to a much larger cohort of investors than the lucky few that it listed as shareholders prior to IPO.

Consider the case of Amazon, which had its IPO back in 1997. It raised the relatively paltry sum of $54m, giving the company a market value of $438 million at the time. Its market capitalisation today is c. $1.75 trillion as at 29th November 2021. Over the last twenty years, public markets provided the opportunity for a wide spectrum of investors to share in the growth of one of the most successful companies in the past two decades.

The Wilshire 5000 (which is the broadest stock market index of publicly traded American corporations) is a misnomer. It contains only 3,500 companies. According to the Wall Street Journal, there haven’t been 5,000 domestic stocks to include in the index since 2005.

There are lots of potential reasons for why the trend of companies staying private longer has persisted. Undoubtedly it has been supported in the last five years by large private-capital pools searching for higher yields in sub-zero interest rate environment.

For the average investor, the trend for companies to stay private longer is not a positive one. The IPO has underpinned equity capital raising for decades but is being increasingly replaced by private capital transactions. It is depriving retail investors of access to the growth in a part of the economy that public markets have traditionally provided access to.

It’s not just about PE funds investing in disruptive new technologies. Buyout funds invest in more mature businesses, with the aim of transforming them - tapping potential profits pools that lie beyond the reach of the public markets.

It has never been more important to consider growth opportunities in private markets. Not least for reasons of our increased longevity and a more modest outlook for returns given the current inflationary and interest rate backdrop.

Access to PE has traditionally been very limited and often comes with various restrictions, some of which are regulatory. PE funds are illiquid, they can be opaque and typically come with hefty fees.

Liquidity is certainly a consideration. But that needs to be dealt with in the context of an overall financial plan, where liquidity needs are assessed and catered for. Investors often pay for liquidity which they don’t use. A typical fund investing in public markets is usually more liquid than a private fund, but often the liquidity is unused or alternatively used during times of stress, arguably the worst time for a long-term investor to sell their assets.

As part of the wealth allocation framework in Davy, liquidity is one of our top priorities, such that we only ever allocate funds that we are highly confident a client will not require access to. Liquidity is catered for as part of this framework and all short-term needs and expenses must be satisfied before we allocate any assets to a satellite portfolio where private equity strategies are held. 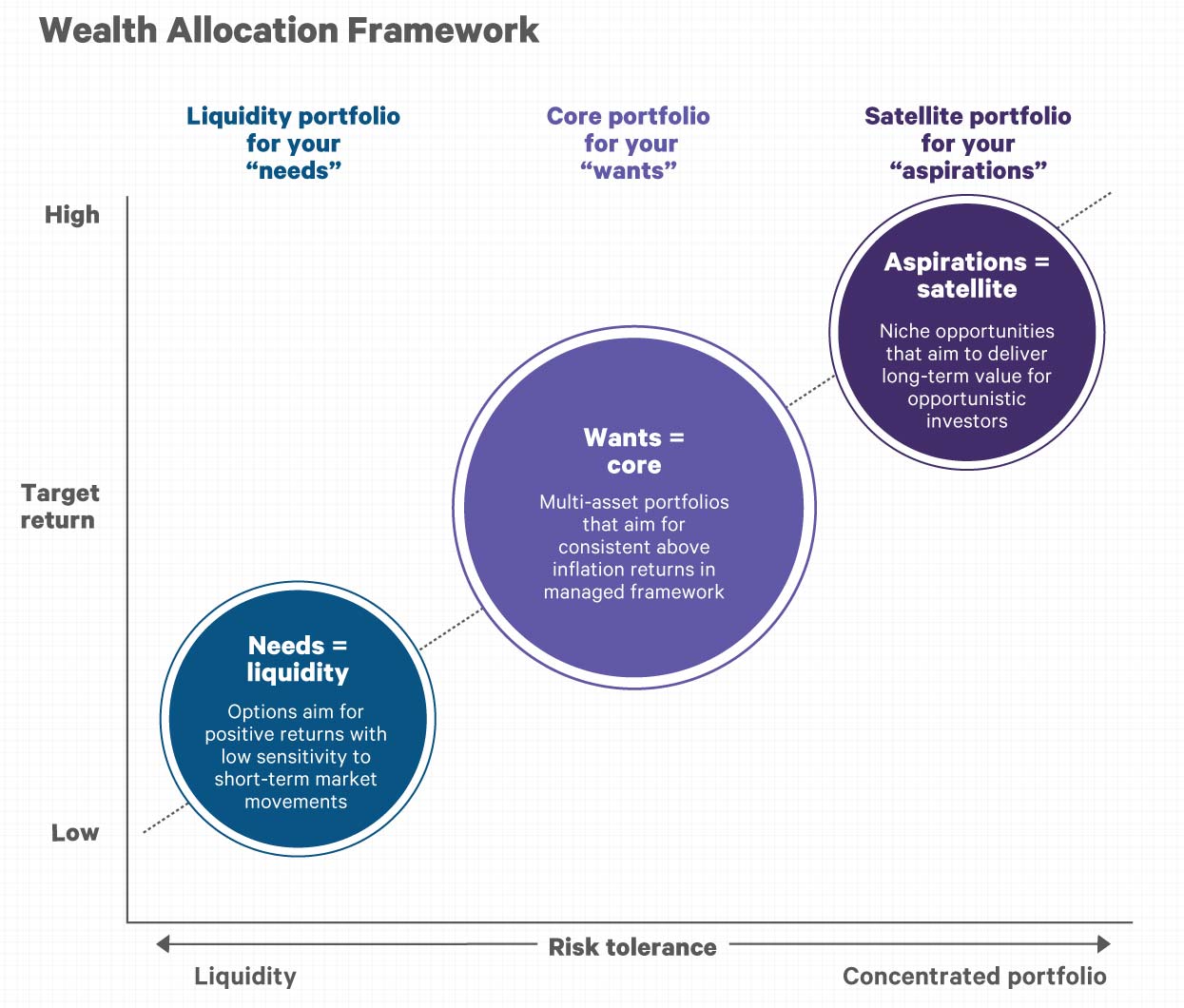 It would be good investor discipline to try and treat all investments as though they are privately held - with no short-term access and no ongoing valuation. Constant pricing and a frequent bid for your investments is important if you need liquidity. Seek that elsewhere in your portfolio - and look to access a portion of your equity holdings through private markets.

Find out more about bespoke and tactical investment opportunities

Warning: Past performance is not a reliable guide to future performance. The value of your investment may go down as well as up. You may not get back all of your original investment. Returns on investments may increase or decrease as a result of currency fluctuations.

Warning: The information in this article does not purport to be financial advice and does not take into account the investment objectives, knowledge and experience or financial situation of any particular person. You should seek advice in the context of your own personal circumstances prior to making any financial or investment decision from your own adviser.

Find out more about bespoke and tactical investment opportunities

How to invest at Davy