Earlier in the year, we advised readers not to fearthe  oncoming interest rate hikes, as we believed that central banks would strike a balance between cooling the economy and avoiding a recession. How things have changed! As inflation has stayed stubbornly high, central bankers have toughened their stance, driving interest rate expectations higher and financial markets lower, turning a cold winter for households into a cold winter for the economy and financial markets. 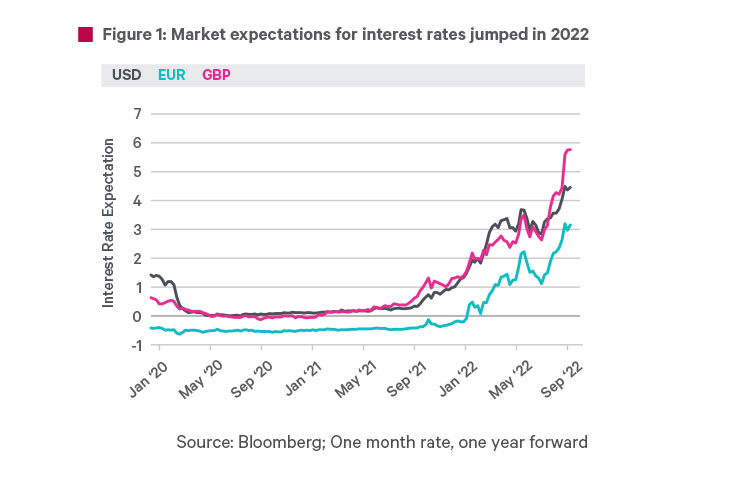 Time and time again over recent decades, markets would face a crisis, crunch the numbers and conclude that we were doomed. Then the US Federal Reserve (the Fed) would take out its monetary firehose, and flood the system with cheap money. If cutting interest rates wasn’t enough, they would buy bonds or find other ways to get funds flowing and the economy going again. With ingenuity and unlimited firepower, no problem was too big that it couldn’t be solved by determined central bank action, and we learned not to bet against them.

Of course, we know now that this has created the opposite problem of too much money, unfortunately at the same time as the supply of goods and workers has shrunk. While nobody knows where and when inflation will be stopped, the market again underestimated the Fed’s resolve to achieve its objective. Although the sharp index declines in September indicate that repeated warnings from the Fed may have finally sunk in.

What will make the Fed relax? It wants to see belowpar growth, a softer job market, and of course inflation itself to come down. Perversely, good news for the economy is bad news for the market, as the stronger the growth, the more the Fed will have to tighten policy. Chairman Powell acknowledges this dilemma, repeating the word “pain” when describing the necessary adjustments.

Looking at the drivers of consumer inflation, we see that while US price growth comes more from goods and services, which the Fed can influence by slowing activity, the largest driver of inflation in the Eurozone, i.e. energy prices, is outside the control of the European Central Bank. The Bank of England faces a mixed situation, where price caps have so far slowed energy inflation but Brexit constraints have made goods and services more expensive.

Is winter coming for the economy?

Although we talk about economic cycles, recessions are not periodic or seasonal. Their timing depends on many factors, like government and central bank policy, and the current environment has other unusual features, like the post-COVID-19 supply hangover, the energy crisis, and the war in Ukraine.

First let’s look at the United States, the world’s largest and most important economy. Here recession models, which are built by looking at past contractions, suggest that the size of the adjustments required to cool down today’s inflation and job market would have caused a recession in the past. However, the unusual strength of the labour market and household balance sheets, and the resilience of corporate earnings, suggest that if it does come, any US winter will be mild.

Unfortunately, the situation is more difficult in Europe. There is the risk that energy inflation is overtaken by energy shortages. Government solutions range from expensive price caps, as in the UK, to elaborate pricing mechanisms that will be tricky to implement across countries with different energy resources. Either way, governments must decide how far they are willing to stretch their fiscal credibility to cushion the hit to their populations. Looser budgets will likely mean higher interest rates across Europe and the UK, where economies are already more cyclical and rate-sensitive than the US. Unless the war ends or inflation comes down sooner than expected, some recession is likely, with the severity depending on government intervention. 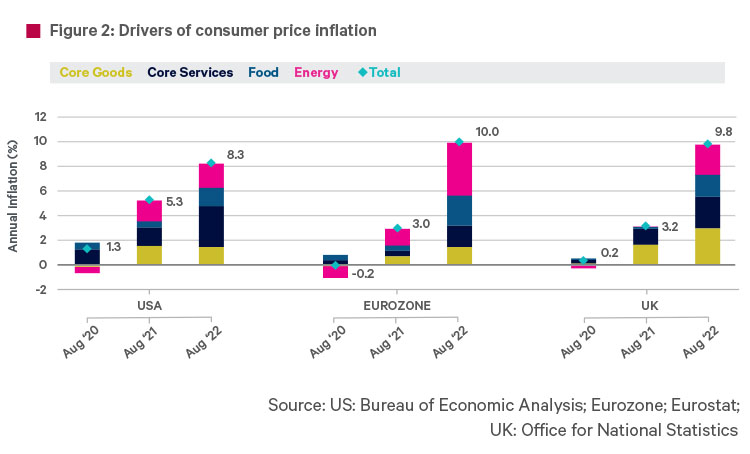 Is winter coming for investors?

As far as markets are concerned, winter is already here. Stocks have fallen into a bear market, i.e. down 20%, and bonds are suffering their worst year since reliable records began. The only question now is how severe and how long this winter will be.

Driven by interest rates, government bond yields have surged by an enormous 3-4% in the past year. The yield gap, or credit spread, between government and corporate bonds widened on the fear of recession and defaults. Higher yields caused prices to tumble, especially for longer-term bonds, and unlike the 1970s, low-starting yields meant there was no income cushion to offset the price declines.

As for stocks, the history of US recessions shows that corporate earnings typically fall by 10-20% and valuation multiples fall by 10-20%, causing a median market drop of 25-30%. The US market has already reached this range, despite there being no recession yet. Unusually, earnings have risen through this bear market, with all the decline coming from falling valuations. European equities, which were less expensive, have seen smaller declines, especially in the UK.

Other significant casualties in recessions tend to be commodity prices. We see this already in industrial metals and did see it with oil until OPEC (Organization of the Petroleum Exporting Countries) decided to reduce production. It is also not unusual in a tough macro environment for the US dollar to strengthen, especially if the US economy is weathering the downturn better than other countries. This time transatlantic exchange rates have also been hit by the war in eastern Europe and the confusion over the new UK government policies.

The investment outlook from here

The rapid adjustment in bond yields has brought them back up to levels last seen over ten years ago. While there is still some upward risk to yields as central banks struggle to contain inflation, most of the worst damage is probably done by now.

Therefore, in our discretionary portfolios, we are gradually reducing our long-standing tactical underweight to bonds and bond duration. Considering equity markets, we outline three broad paths:

1. We don’t get a recession, in which case stocks have overreacted and should bounce from here.
2. We get a mild recession, which is consistent with where the market has moved to. Some more downside is possible, especially if inflation stays high, but the skew of returns from here is upwards.
3. We get a severe recession. In this case, there is more downside for sure, as earnings will decline and valuations can fall further.

Our view is that paths (1) and (2) are much more likely than path (3), especially in the US, and therefore we have increased our US equity allocation on a tactical basis (12-month horizon). 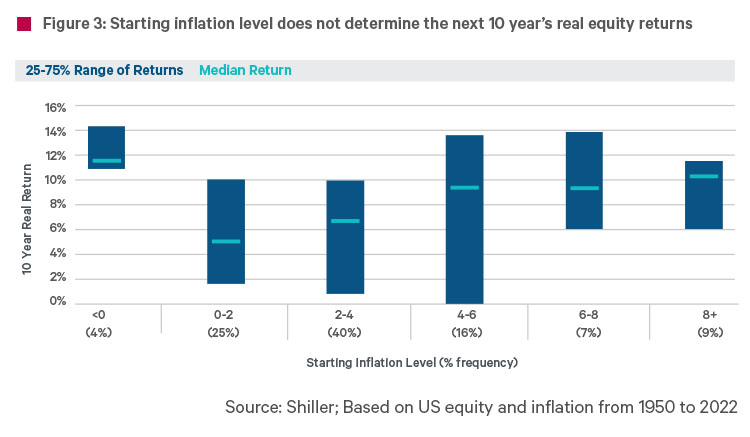 Looking further ahead, beyond our tactical horizon, what do higher inflation and interest rates mean for real asset returns for the rest of the 2020s? The era of cheap money is over for consumers and businesses, and higher economic volatility may mean lower valuations for stocks than what was enjoyed in the Goldilocks years. At the same time, investors will face a higher inflation hurdle.

To investigate the potential influence of inflation, we filter historical real US equity returns by initial inflation levels. Figure 3 shows there is no strong relationship between starting inflation levels and subsequent returns. If anything, high initial inflation was associated with stronger returns, as high interest rates were eventually reduced, spurring growth.

The most significant predictor of long-term returns is valuation, and here the bear market has left multiples at or below their average levels for this century (see Figure 4), still leaving some room for upcoming earnings to disappoint. 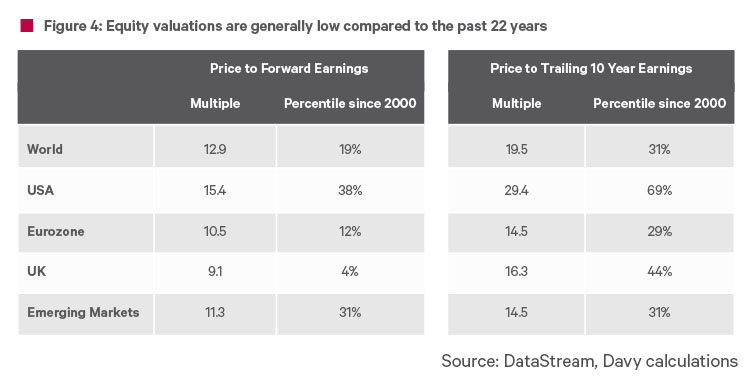 After winter, even a tough winter, comes spring. As financial markets are anticipatory, they decline before the economy does, and recover before it does. Our current tactical stance is to increase our US equity allocation, but hedge the US dollar exposure, and reduce our underweight to duration in bonds.

Our longer-term strategic view is that asset prices have adjusted to create more reasonable return prospects for financial assets, and even though the road will be bumpy and inflation may remain above target for some time, the risk-reward ratio is now more favourable than it has been for many years.

Has Goldilocks left the building?