Global equities - 'E' is good - or at least good enough!

Although there is some debate about it, one school of thought is that fairy tales were cautionary stories passed down through the generations by word of mouth to teach young children about some of the dangers in life. Don’t go into the woods alone; don’t speak to strangers etc. So far in 2022, investors may feel that they, too, are living in a fairy tale – one where they are Goldilocks and have entered the house of the three bears (Inflation, Interest Rates, and Economic Growth).

Initially, we had to deal with Daddy Bear (Inflation) where the porridge (prices) was “too hot” and needed to be cooled in a hurry as the “heat” proved to be more than just transitory in nature. Then there was Mummy Bear (Interest Rates) that was too cool (low) given the conditions outside, in the labour, goods, services, and energy markets. Monetary authorities have pushed to “normalise” interest rates after the prolonged period of loose financial conditions and quantitative easing (QE). Finally, we come to Baby Bear (Economic Growth) – there is much debate about whether global economic growth will prove to be “just right” and therefore, very palatable for Goldilocks, or whether the actions of central banks cool it too much, creating a bowl of cold sludge!

What has made this year somewhat unusual has been the fact that these same issues have produced negative reactions in many asset markets. Looking at government bond markets, the rise in bond yields over the past nine months looks more or less completely justified based on the state of the economy and the evolution of central bank expectations. However, this had implications for other asset markets with higher yields which explains some of the ongoing strength in the US dollar, and perhaps by extension weakness in commodity markets. 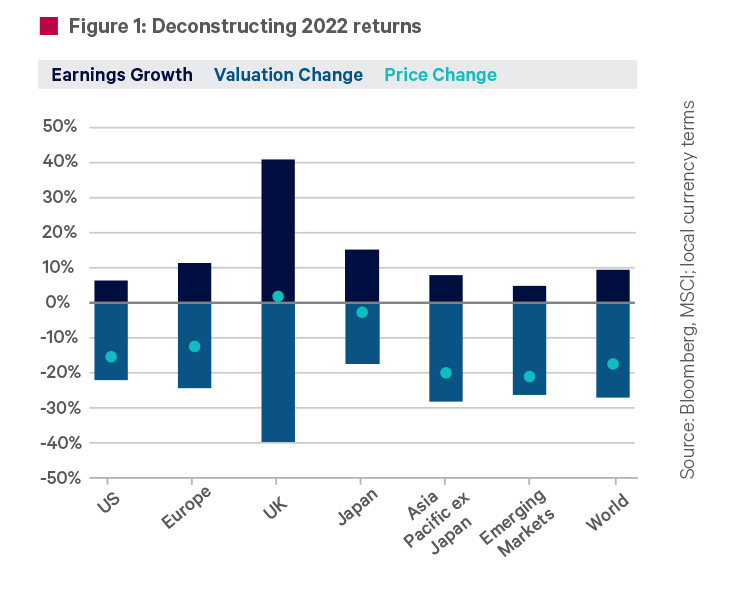 Across every region the de-rating of valuation multiples has been significant for the most part, but doesn’t necessarily take account of the absolute multiple that the region is trading on. For example, traditionally cheaper areas like Europe, the UK, and Asia have seen the largest correction in valuation so far this year. Currently, US multiples remain elevated relative to the rest of the world, so some might argue that there remains more room for the downside. That being said, sector composition explains much of this disparity, with the US market obviously enjoying a heavier weighting of the high-multiple tech sector.

The other point worth noting is that, for the most part, the change in valuations has been greater than that explained solely by a move higher in bond yields. This begs the question of what else could be going on? The answer lies with Baby Bear!

The debate on the future path of economic growth is inextricably linked to the outlook for corporate profitability. Given the magnitude of valuation compression, it is not unreasonable to conclude that markets are pricing in an earnings recession in 2023. A reduction in earnings would result in forward valuations moving higher, undoing some of the de-rating seen this year.

While this might seem like a logical explanation for the price moves seen so far this year, the rationale breaks down when you look at analysts’ and strategists’ forecasts for earnings in each of the regions – Figure 2 below gives a good snapshot. 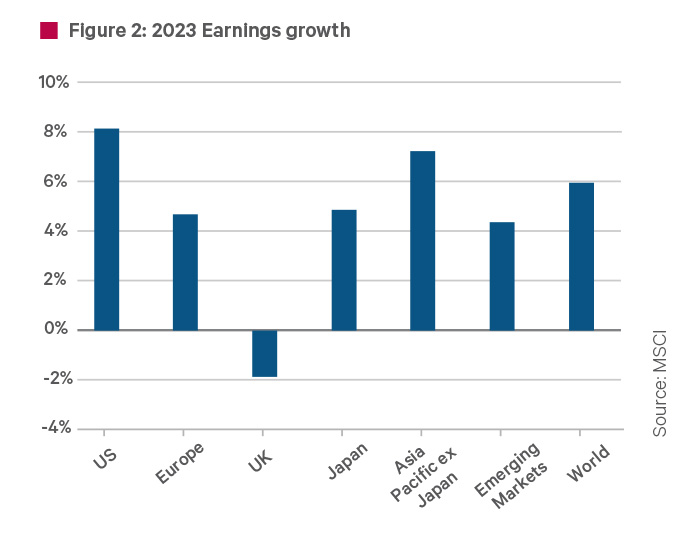 The bears will argue that these forecasts have been falling in recent weeks, and while there is no denying this, there is a big difference between reducing growth rates and declining profits. It seems unlikely that the multiple compression can get much worse, though previous experience suggests that it can persist longer than you think. Even if the central banks start easing policy, should the economy and investor sentiment become weak enough.

As investors sit at their desks (with their sun bleached golden locks after the summer months), Daddy Bear and Mummy Bear may still be in the background, but the focus will be on Baby Bear’s breakfast bowl. If economic growth turns out to be not too hot and not too cold, then the outlook for corporate profits could come in close to current forecasts. In which case, the prospects for equity markets would seem brighter into next year, driven by growth in earnings and some valuation expansion. The problem, for now, is that it will take time before we get clarity on how quickly inflation subsides and how low it goes, the terminal level of interest rates in this cycle, and what their impact will be on economic growth.

In the meantime, unlike fairy tales that are passed by word of mouth, no amount of ink will be spared discussing these topics. Therefore, it might be best to choose your reading material wisely!

Can the US dollar keep smiling? - Remaining front and centre

Global equities - Where could it all go wrong?