Housing – the only way is up?

It’s fair to say that one of the lessons we can draw from Covid-19 relates to the value of our immediate surroundings. Never has the comparison of our homes as our castles been more apt, as our homes have become our offices, entertainment venue, place of education, and everything in between. This has inevitably led to an increased demand for housing, coinciding almost exactly with constrained supply due to a myriad of reasons. The end result has inevitably been significant house price inflation, with the most recent reported house price inflation in Ireland +3.7% yoy (and higher in Dublin).

However, it’s important to recognise that the pandemic has affected the housing market in many countries and house price inflation is not a phenomenon unique to Ireland. In the UK for example, recent numbers show year-on-year inflation of close to 9%, and in the US the most recently reported number was an even higher 12.7%!

While we can see that in other countries the supply demand dynamic is somewhat similar to Ireland, there are a couple of factors that have exacerbated the housing shortage here. The first is that Ireland had probably one of the most recognised existing housing shortages heading into the pandemic. The second is that whilst almost all countries prevented construction from happening during the first Covid-related lockdown, for second and subsequent lockdowns, building was deemed an ‘essential service’ and so was typically allowed to continue. However, in the case of Ireland, most construction, except for ‘houses nearing completion’, was disallowed during subsequent lockdowns. The unintended end result was the Irish housing shortage becoming even more pronounced during the pandemic.

It’s important to point out however that house price inflation is also a factor of materials inflation, which again is not a domestic phenomenon. As countries globally face housing supply and demand imbalances, so too are they racing to increase supply. This means that certain materials, such as copper, steel, and timber are facing supply shortages and hence considerable price inflation globally. In Ireland, timber shortages are particularly acute following issues in the granting of forestry licences last year.

The net result is that house prices are rising to reflect not only the supply-demand dynamic in the housing market, but also materials price inflation. And once again it is the beleaguered first time buyers who are feeling the pinch. However, where Ireland differs to some peers is that directionally at least, Ireland is bringing in or extending stimulus  such as the Help to Buy Scheme or Shared Equity  Scheme with the intention of helping first time buyers get on the ladder. This compares to the UK, for example, which is removing the ‘help to buy’ stimulus for movers, in addition to ending its stamp duty holiday at the end of June 2021.

Figure 1: House Price Inflation in the UK, US & Ireland 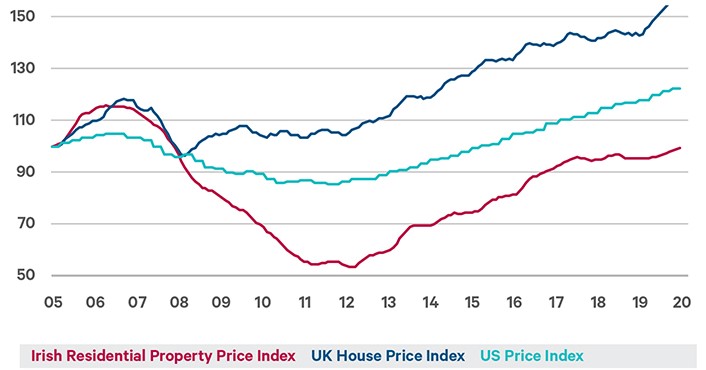 The other widely debated topic at the moment is PRS (the Private Residential Sector) and its impact on the housing market. With interest rates at low levels and rental yields in the buy to let sector comparably attractive, it’s no wonder that institutional investors are attracted to the market. PRS is highly established in Europe and the US, but in recent years the market has been flourishing in Dublin as well and has proven an effective way to increase the supply of apartments. However, when two investment funds moved recently to buy an entire housing estate in Maynooth, the government felt obliged to step in. The end result has been a somewhat controversial decision to increase the applicable stamp duty for houses (but not apartments), to 10% for the purchase of more than ten units. Whilst this decision has been widely debated, the accepted view appears to be that increasing the stamp duty on apartments as well would have led to a decrease in new supply - clearly not optimal in a market that has product shortages.

Ultimately, it appears that there will be no short term solution to the housing issues in Ireland or elsewhere, and it may take some time for supply to catch up with demand. Nonetheless, market dynamics should prevail in the longer term to bring about a more balanced market.