Outlook 2021| Looking past the pandemic

As well as the heavy human toll, 2020 hit businesses and economies hard. But we’ve had enormous levels of support, previously unseen in peacetime, from governments and central banks, and now we have several vaccines on the way. The key questions for 2021 and beyond are; which of the changes that we saw in 2020 are temporary and which are permanent, and have the problems that we faced before the pandemic gotten any better or worse?

Commentators have made comparisons with the 1920s when the last global pandemic gave way to a decade of technological advance and booming stock markets. Could the roll-out of Covid vaccines and new technologies cause another boom in the 2020s? Of course, back then we had just been through the Great War, the depression of 1920-21, and asset valuations were far lower than today.

2021 growth forecasts are already high and rising, which is positive for corporate earnings and stock prices. However, most economies are only forecast to regain their 2019 level by the end of 2021 or 2022, and employment usually takes longer to recover. This means little inflationary pressure for several more years. Continued growth and low interest rates are ideal for stock markets, although the higher starting valuations mean that we shouldn’t expect the same returns as in the 1920s.

Post-Trump – is there a vaccine for political dysfunction?

Supporters of President Trump point to his tax cuts and judicial appointments as evidence of his success, but overall, his chaotic administration has been dangerously polarising and ineffective. Domestically, President-elect Biden will bring more stable leadership, where he’ll need to manage both obstructive Republican opposition and impatient Democrat progressives. Internationally, most countries will welcome his constructive approach, but trade and tech competition with China will continue long after Trump.

For much of the past decade, as they kept interest rates at historic lows, central bankers stressed that their monetary policies alone could not solve the world’s problems. Their calls for government action were largely ignored until 2020 when the Covid crisis led to massive fiscal support. This cooperation did help to prevent a worse collapse but has led to record peacetime deficits and the moral hazard of continual intervention.

Post-Brexit – is Europe turning a corner?

Time will eventually tell if the UK really is better off on its own, although economic models and history suggest that this is not likely. The most important thing now is that both the UK and the European Union can move on to concentrate on fixing their problems and improving their peoples’ futures. In the UK, PM Johnson has floated plans to make the UK into a hub for a greener industry. While laudable, his track record suggests that this may be another promise that is never realised.

As for the EU, a significant milestone was passed in 2020. The lack of policy coordination across member states, made painfully clear by the virus crisis, led to new centralised fiscal powers. The size may be smaller than US stimulus packages, and the details will be haggled over, but the fact that the EU is mustering a budget of this size, and funding itself in the capital markets to do so, is genuinely ground breaking.

For several years now, weak economic growth has led to a strong demand for higher growth stocks. Value stocks have lagged badly, and the valuation gap has reached record levels. Now with higher growth forecast for 2021, many analysts see value making a comeback. This could mean Europe and the UK out-performing the US, and beaten-up sectors, such as energy, autos, banks and airlines, out-performing technology.

We agree that cyclical sectors, being more sensitive to economic growth, should see faster earnings growth and higher returns in the recovery. But we caution that many value sectors were struggling before the virus, and a vaccine will not fix their problems. These problem sectors make up more of the European and value indices and will weigh on rotation hopes.

Figure 1 breaks down market returns over the last cycle from 2009. We can see that higher returns from the US and its tech sector were driven more by earnings growth than valuation increases. Lower returns from Europe and financials came from a lack of growth. To expect a real rotation, we must expect some improvement in growth there too. 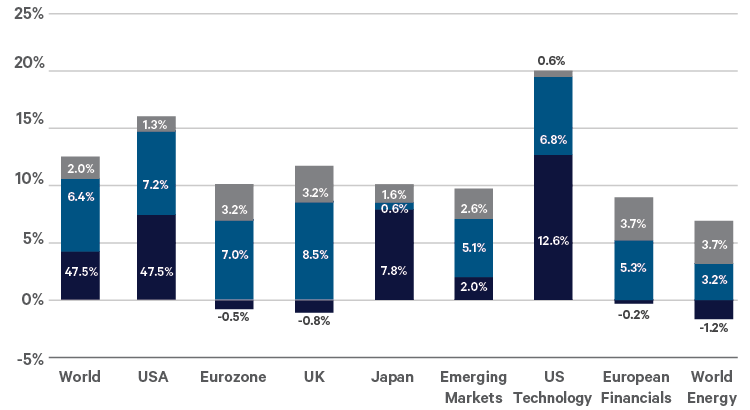 Source: Bloomberg & Davy, as at 31st December 2019; based on total return indices

Where are we in the cycle(s)?

Despite huge drops in Q2 and giant bounces in Q3, the business cycle in the US and Europe is still at best lukewarm, with the US a little ahead, and Europe at risk of cooling due to winter lockdowns. In China, where the recovery is more advanced, credit doubts are emerging with even state-backed borrowers now defaulting.
At the start of 2020, we noted that the market cycle was running hot compared to the economy. A year later this gap is even larger. Valuations are indeed based on expectations of future growth, and we do expect larger-than-usual increases in earnings in 2021, but it is a concern that markets have run so far ahead

Has all the good news happened already?

Most of the high-profile risks that we worried about, like the US election, the economic recovery and the vaccine timeline, turned out more favourably than expected, adding fuel to the markets in 2020. The question now is how much more good news can we expect for 2021, and what happens if the news-flow turns negative?

The market mood will rise and fall and trying to predict it is not our strategy. Instead, we distil our tactical outlook down to a few simple questions. Do we believe that the economy, and corporate earnings, will continue to rebound? Yes, we do, and therefore we favour stocks over bonds or cash. Do we believen that cyclical sectors have more recovery in them than defensives? Yes, and our portfolios are over- weight cyclical sectors, including small caps, but not the deep value sectors.

On a strategic horizon, 10 years or more, the outlook is less favourable. History shows that eventually higher valuations lead to lower returns, and stock markets today are expensively valued. The outlook for cash and bonds is for negative real returns, i.e. after inflation, for the foreseeable future. Therefore, we continue to encourage our clients to revisit their financial plans with more realistic expectations, and to reconsider whether they have the right amount of liquidity and a sufficient allocation to growth assets.

This article is from our Outlook 2021 edition of MarketWatch.

This article is from our Outlook 2021 edition of MarketWatch.