Will record stimulus lead to inflation?

The bounce in the economy, and in expectations

During the first lockdown, when everything ground to a halt, economic forecasts were dire.  And they weren’t far off, with Q2 2020 seeing the largest ever recorded drop in GDP (gross domestic product).  But with central banks supporting the financial system and governments spending trillions to replace lost wages and activity, we avoided a genuine depression.  So when lockdowns were eased, the economy was able to bounce, and Q3 saw the largest recorded increase in GDP.

While optimists cheered, pessimists warned that this was a false recovery and that the economy would collapse once the money taps were turned off.  Since then we’ve had Biden and Democratic victories, with the promise of continued spending, and earlier-than-predicted vaccine approvals, and expectations for 2021 have soared.  Figure 1 highlights how forecasts for the United States have lifted upwards with all the good news, further fueling the stock market rally. 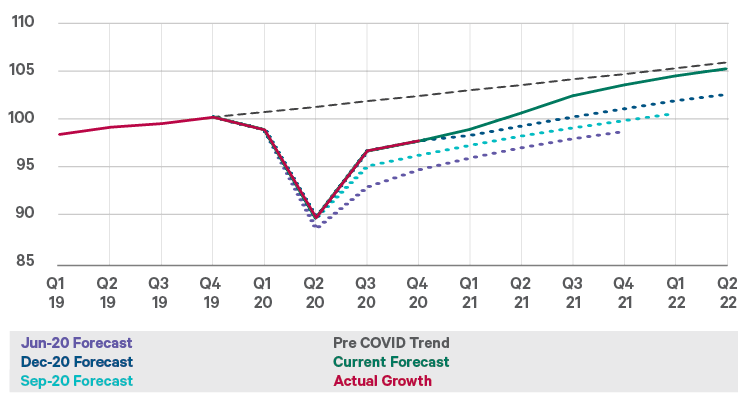 Too much money chasing too few goods?

But the doubters now have a new worry – that we’ve had too much financial support (see Figure 2), and all this extra money will lead to inflation.  Although the US economy, and employment levels, will be below the pre-COVID trend for several more years, the Biden stimulus bill is already larger, in dollar terms, than this output gap.  By contrast, the economic decline in Europe has been worse, and the road to recovery will be longer, even with the vaccination success in the UK.

We have heard this inflation scare story before, and the narrative is intuitive given the extraordinary amounts of central bank and government money sloshing around.  When central banks spent trillions of dollars during the Global Financial Crisis on quantitative easing, i.e. buying bonds, many worried then that this would cause inflation.  And it did, but mostly to prices of financial assets, and less to consumer prices, because most of the money stayed in the bond markets.

Will we get inflation this time?

We do expect to see higher inflation in Q2 this year, mainly because it’s a 12-month measurement, and prices slumped in Q2 last year.  Beyond this, we expect price rises to moderate, except for sectors where there are supply issues, like semiconductors.  Most importantly the Fed (US Federal Reserve) have been clear that they will allow inflation to run above their 2% target for some time, until they see full employment.  So while we may see higher inflation than in the previous cycle, this shouldn’t lead to tighter policy sooner.

Looking at our business cycle indicator, the economy isn’t close to over-heating.  But we don’t need to see high inflation for it to be a problem.  If enough people believe that price rises are imminent, the damage can be done.  Bond yields rise on fears of central bank tightening, and can panic the stock markets.  We almost had a bear market on such fears in Q4 2018, until the Fed calmed the situation.  With market valuations so high in 2021, stocks may be more vulnerable to mood changes than usual.

What can an investor do?

There are two ways to manage against inflation, and it’s important to distinguish between them.  You can own inflation-sensitive assets that go up when inflation does, to hedge your portfolio in the short term.  Or you can own assets that grow faster than consumer prices over the long term.

Many investors take the first approach and hold gold and other commodities as portfolio hedges.  Unfortunately, the track record of this strategy is mixed at best.  So we prefer the second approach.  Even at today’s high valuations, public and private equity still offer the best long-term protection against inflation.

In summary, we don’t believe that inflation is an imminent problem for markets, but we do think that portfolios should be designed with inflation in mind.  To mitigate this long-term risk means taking more short-term risk, in the form of volatility or illiquidity.  And as always, a solid financial plan, and the ability to stick with it, is the best way to manage these risks.

This article is from our April 2021 edition of MarketWatch.

This article is from our April 2021 edition of MarketWatch.