Demographics: A view to the future

Demographic trends are set to reform our lives completely in the coming decades. New initiatives increasing the retirement age, female participation and the use of technology will be introduced in order to compensate for a drop in the working population. The importance of wealth management and pension planning will also increase, especially in those markets with insufficient publicly offered retirement options. At Davy, we constantly monitor and analyse trends to bring you the most up-to-date, insights and analysis on pension planning and investment opportunities.

The world’s population is ageing, that’s a given. Globally, the rate of population ageing is most advanced in Japan, but Europe isn’t lagging far behind. By 2050, almost 30% of the population in Europe will be older than 65 years old. In Ireland, data suggests that the older dependency ratio will increase from a rate of 23% to 42-49% in the next 30 years, depending on the assumptions made regarding migration and birth rates. 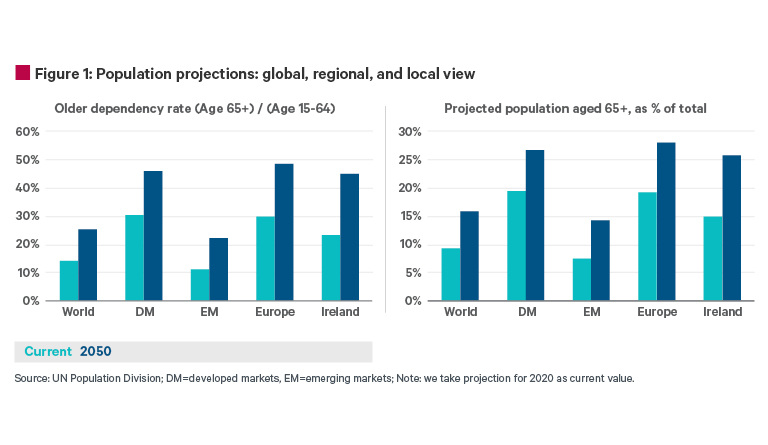 Time to adjust – Ireland is ready

The good news for Ireland is that while its population is ageing, it is doing so at a slower pace than other developed European countries - in particular Germany and Italy. According to United Nations (UN) data, the working population in Germany peaked around the year 2000 and has been declining ever since. In comparison, the working population in Ireland isn’t set to peak until after 2050, though the over 65 age group is undoubtedly growing. This should give Ireland more time to adjust than its European peers.

A longer-term approach to investments

In our Outlook 2019 edition of MarketWatch, we commented that ageing populations tend to require more healthcare and we believe this is a trend that will continue for some time. The recruitment industry will also undoubtedly be affected, as people are forced to work longer, but may be less loyal to ‘jobs for life’. Infrastructure should also benefit, as buildings and cities adapt to cater for an ageing population. As working populations dwindle, we can also expect factory automation and increasing female participation in the labour force to be key themes.

Our view is that pension companies may need to look at longer-term investment policies as people live longer. Traditionally, when workers approached the age of retirement, the standard advice was to invest in less risky assets, such as bonds. However, there is some argument now that this kind of low-risk investing may no longer generate the returns needed for a longer life.

What does this mean for your pension?

Relatively speaking, Ireland is in a good position as life expectancy is generally higher than the EU average, and ‘healthy life’ (the number of years that a person is expected to continue to live without limitation in function and without disability) is also increasing. Between 2007 and 2016, the healthy life expectancy for both women and men in Ireland has increased by over four years to 69.8 for women (more than five years above the EU average), and 67.3 for men (four years more than the EU average).

This is a promising outlook as the Irish government and its counterparts across Europe and beyond are fast realising that people will have to work longer to sustain the pension pot of an ageing population. The golden era of the ‘baby boomer’, post-war generation, where people could expect to retire before the age of 65 and have a comfortable lifestyle on a defined benefit pension, is over. The reality for most workers today is that retirement is getting pushed out to increasingly later dates. In July 2018 the Irish government agreed a new text of legislation to allow thousands of public sector employees to work until they are 70 years old. Also, officially the state pension age, while 66 in 2018, will increase to 67 in 2021 and 68 in 2028. The trend for later retirement is one that will continue.

If we look at how to address a dwindling working population, we identified Japan as a good example, where 30% of the population is already over 60 years old. This decline in the traditional age working population has led the current prime minister, Shinzo Abe, to look for alternative labour through increased factory automation, and attracting more women back into the work force.

The easiest way to find new labour in a tight market is to tap into those workers currently underutilised in a country's population. In Ireland, the scale of our underutilised female labour force exceeds that of all our European peers. Female representation makes for a really interesting investment topic, given gender diversity is a growing investment theme globally. Research has shown that gender-balanced companies on average have better performance over time in terms of share price, profitability, and risk reduction. Other research is showing that companies with above average ratios of female executives have above average ROE (return on earnings), which arguably leads to financial outperformance. 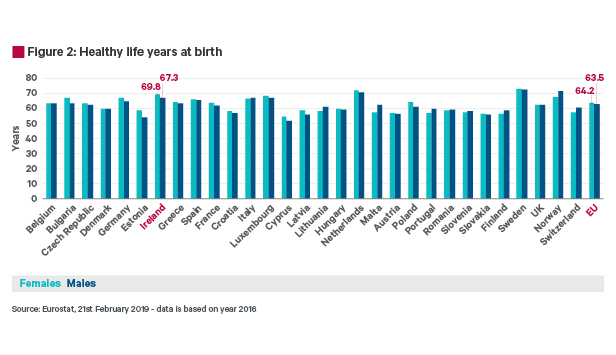 We have also spotted a number of different trends in consumer spending among different age groups. In the wake of the global financial crisis, young people in developed countries faced a tight job market, high costs of living and excessive student debts, which fundamentally changed their spending habits. Millennials now comprise the largest portion of the labour force, with significant purchasing power, which in turn drives global growth and dictates industry trends. They are more cost conscious and buy products that meet their personal values, which they share with the world via social media platforms. Consumer industry players must employ data-driven marketing strategies to study their customers’ tastes and provide tailored services for this new generation.

Meanwhile, millennials’ parents, who will account for almost one-fifth of consumption growth in the next decade, are not far behind. As couples delay having children, and have fewer of them, recently retired grandparents have time, energy and freed-up cash to spend on themselves (whether it’s a cruise, restaurant trip or a pilates class). Elderly people, on the other hand, have fewer family members to take care of them at home, which increases demand for more nursing homes.

Declining fertility rates fuel concerns that the labour force will shrink in developed markets. Economic theory suggests that if no technological innovation or capital infusion offsets losses in labour supply, output will unavoidably fall, reducing competitiveness. While local governments are searching for solutions, economists are debating whether technology can mitigate these concerns. Indeed, academics suggest that robotics and artificial intelligence (AI) have the potential to offset declining labour supply. Sceptics, however, assert that AI will make human workforce redundant in certain sectors. Sectors such as training and education may see a spill-over effect as decision makers will attempt to re-skill their workers. The debate will undoubtedly continue, and we will keep track of developments.

As with any structural transformation, we see that changing demographics open opportunities for both new sectors and established industries. While consumer sector players must adjust to shifts in client taste, healthcare benefits from a growing and loyal customer base. As most developed economies continue to struggle with their debt levels, policymakers will be prioritising low cost and high efficiency, opening the door for greater investment in robotics and AI. Public funds are limited; therefore, governments will be supporting private sector pensions and healthcare.

Meanwhile, Ireland is ready to embrace the change as the government has already implemented steps to address the needs of an ageing population. We will watch closely for any spill-over opportunities in the private sector.

This article is from our April edition of MarketWatch.

This article is from our April edition of MarketWatch.

Brexit and the real cost to the UK

Populism in Europe: Will the European Union change?