Boris Johnson unveiled his proposal last week for “two borders for four years”. We do not believe it was a serious gambit to find a compromise exit deal. There is now a negligible probability that any agreement can be found before the EU Summit on 17/18th October. Instead, the Conservative Party is focused on the next UK general election rather than leaving the EU on 31st October. The EU Summit on 17/18th October could see a very public bust-up, with Johnson storming out of the negotiations and blaming the EU for its intransigence.

Johnson will also probably refuse to send, or come up with some ruse to avoid doing so, the Article 50 extension letter that he is required to write on 19th October, under the Benn Act. However, either court action or a ‘national unity government’ will ensure that the UK does apply for an Article 50 extension. The theatre will assist Boris Johnson in presenting himself as the champion of Brexit, frustrated by ‘remainer’ elites, and help him overcome his “do-or-die” pledge (and the Brexit party) ahead of an election in November.

To no great surprise, the Irish government – while not dismissing Boris Johnson’s proposals out of hand – came as close as possible to doing so. On Thursday 3rd of October, the Irish Times reported that “there is little expectation in Brussels or Dublin that a deal on the basis of the new proposals is remotely possible” and that “highly placed sources agreed it is unrealistic to expect that a new agreement could be struck” and “most are of the view that an extension to the 31st October date is likely”. Also, “Brussels sources made clear the British plan would not be the basis for a new deal” and “were bewildered at the idea the British government could see its new formal negotiating offer as the basis of serious talks”. Moreover, “the view, widely shared, was that what they were observing was little more than a cynical preparation for a domestic argument about who was responsible for the talks’ failure”. Finally, “Brussels maintains the proposals are also a breach of the commitment by the UK to the Belfast agreement “in all its aspects”.

It is difficult to breakdown in one paragraph the many problems with Boris Johnson’s proposals, but we can try to do so – based on three points.

1. The worst of both worlds for Northern Ireland business: Sharp criticism of Johnson’s proposals came from Northern Ireland business groups faced with a regulatory border with Britain and a customs border with Ireland/EU – doubling their burden of red-tape. Furthermore, investment and planning would be held hostage by the regular four-year votes in a reconstituted Stormont assembly, where the DUP could suddenly threaten to end regulatory alignment with the EU.

3. Implementation: Within two weeks there probably isn’t time to flesh out a legally implementable agreement. Johnson’s proposals would require the EU to commit to ‘alternative arrangements’ on customs checks (trusted trader schemes, technology, satellite tracking) that don’t yet exist or have not been seen as effective.

Last Wednesday 3rd October, the Financial Times quoted a UK Cabinet minister as saying that “The Benn act hasn’t been tested in court” and that if such legal action failed “Mr Johnson’s team believes he could still have a credible campaign in a subsequent election. He would frame the poll as the prime minister taking on a Remainer elite of MPs, judges and the media”. The Irish Times reported similar sentiments: “few people in government circles expect a realistic negotiation with the UK in the coming weeks, let alone a deal”. “Instead the Government, like most people in Brussels – expects an extension to be requested, either by Johnson’s administration or by a replacement. That extension will almost certainly have to be followed by a UK general election. That vote may ultimately decide whether the Irish border is to be hardened”.

Irish media also cited EU officials stating that a six-month Article 50 extension would be preferable and will be considered by EU leaders. Some countries are understood to believe three months would not be a sufficient window for the UK to hold a general election and a new government to form a coherent plan. Irish MEP Mairead McGuinness said that members of the UK House of Lords had urged her to be aware that a January deadline “will not be sufficient”.

One could characterise Johnson’s proposals as pushing the DUP to accept 50% of Theresa May’s original Northern Ireland backstop. More positive interpretations included EU officials welcoming the “broad landing zone” and that Boris Johnson’s letter did not repeat the “take-it-or-leave-it” rhetoric (allowing some room for negotiation) and “their offer on goods regulation is a step forward”. It could be argued that, in time, the DUP will have to accept Northern Ireland remaining not only in the EU regulatory sphere but also the customs union (i.e. the original Northern Ireland backstop) subject to some Stormont oversight. This would clearly be more likely if Boris Johnson can win a Conservative majority at the next election.

Irish government sources were reported to be firming up their position on Johnson’s proposals, focusing on two key objections

i) The North/South customs border

Our view is that it will take many years to arrive at the final destination point for Northern Ireland border arrangements and EU/UK trade agreement. During this time serial extensions of either Article 50, or alternatively the ‘transition period’ in the Withdrawal Agreement, are likely – probably at least to the mid-2020s.

Perhaps the most telling commentary on the state of mind of the UK Cabinet came from The Spectator magazine. According to James Forsyth, attending the Conservative Party conference this week, “there was a lot of no-deal prep stuff in Sajid Javid’s speech, but it is quite hard to find many people who in private, and in particular after a glass or two of wine, really think the UK is going to leave on October 31st”. The Spectator’s Katy Balls said that the conference “didn’t feel like a no-deal rally” despite “speaking to cabinet ministers at all these drinks events, you do get the sense that I would say the hopes in terms of achieving a deal are fairly low”. Also, “in terms of how they could weather an extension, one of the things I understand is, there are some figures who think, so long as you can blame it on other institutions there is a route through for that”. Forsyth went on to argue that the Conservative Party’s strategy for the next election would be to blame either Parliament or the courts for the Article 50 extension, saying “there is an increasing confidence in number 10 that the public’s reaction might be…the only guys trying to get it  done is Boris Johnson” – helping him overcome his “do-or-die” commitment to leave on 31st October.

The Irish Times’ London Editor Denis Staunton, attending the Conservative Party conference, drew a similar conclusion, saying that “one of the most remarkable features of the Conservative conference in Manchester was the absence of any expectation that Britain could leave the EU without a deal at the end of October”. “Most of the Conservative activists listening to Johnson believe Britain will still be in the EU when he leads them into a general election, probably in November. The party is increasingly confident Leave voters will back Johnson even if he has failed to deliver Brexit on time”.

Of course, betting odds reveal similar sentiments, currently placing the odds of ‘no-deal’ in 2019 at just 18% – still close to the lowest level since the aftermath of the Brexit extension prior to the original March 29th deadline. 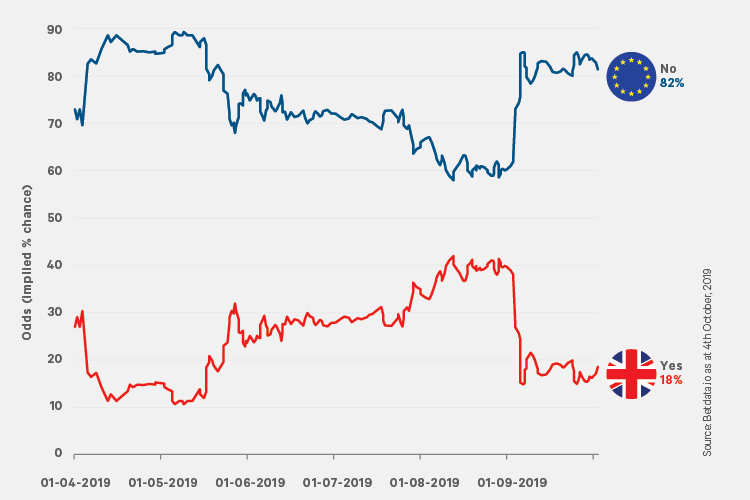 On the belief that Boris Johnson’s new proposal for ‘two borders for four years’ isn’t viewed as a serious attempt to secure an exit deal, there is little chance that a new deal will be agreed on before the EU summit on the 17-18th of October. We see increased probability of an extension ahead of the 31st of October deadline. The deviation from the no-deal scenario was seen in the market’s reaction last week as sterling rallied mid-week, and domestic small caps outperformed large caps, which are more exposed to international revenues.

On October 2nd Boris Johnson unveiled the ‘two borders for four years’ Brexit plan which anticipated leaving Northern Ireland in a special relationship with Europe until 2025. The overall response from investors was negative. The FTSE 100 Index and FTSE Small caps plunged by 3.2% and 1.3%, respectively, in one day. The FTSE 100 covers larger UK companies with international revenue and has an inverse relationship with sterling. Every time probability of a ‘no-deal’ outcome weakens and prospects for the UK domestic economy improve, sterling appreciates. Higher sterling means lower non-domestic revenues of FTSE 100 constituents due to the currency effect. Although it is not an organic decline for non-domestic revenues, this effect could drive investors to dump UK large caps in favour of domestic small caps, at least in the short term. The less international FTSE Small caps index benefits more than the FTSE 100 from any possible deal or an extension as its members are more dependent on the health of the UK economy. Although another delay would be better received by markets compared to a no-deal, an extension doesn’t remove the elephant in the room. Market participants would continue to speculate on the UK-EU relationship as uncertainty persists especially with the prospect of a general election.

Last week delivered a period of short-lived upside for sterling which was largely unravelled by the end of the week. The optimism around the unveiling of Johnson’s Brexit proposal and the backing it received at the Conservative party conference resulted in sterling moving higher versus the euro and the US dollar on Thursday. This optimism was short lived however as Irish and EU officials voiced caution towards the proposal without dismissing it outright.

Since early August, sterling has recovered from a 93p level, ending last week at 89p versus the euro. These gains have largely been on the back of a fall in odds of a no-deal Brexit occurring in 2019 (see chart above).  In the event of the EU granting an extension and an early general election scheduled for November, investor focus will swiftly turn to a new set of odds calculations – the probability of a new conservative government with a hard-Brexit mandate. Sterling at its current level is not pricing in a high probability of this outcome beyond the October 31st deadline.

UK and global economic data have been the main driver of UK government bonds more recently. Last week’s UK Services PMI (Purchasing Managers Index) showed the index dropped to 49.5 in September, from 50.6 in August. Any reading below 50 indicating the sector is in contraction territory. The UK 10-year bond yield finished the week down 6 basis points at 0.44% within touching distance of its all-time low.

Investor concerns in the UK and elsewhere now focus on the reality that weakness in the manufacturing sector, which has been under pressure due to the slower global trade growth is now spilling over into the larger, more important services sector. The weaker data has added to investor expectations that the Bank of England (BoE) may need to cut interest rates, although a resilient unemployment rate of 3.8% and wage growth close to 4% would provide resistance to these expectations. The overnight index swap currently prices in approximately 6 basis points of BoE easing for November.

Davy view: What might a UK general election mean for Brexit?