Setting Budget 2023 will be an especially challenging task for Ministers Paschal Donohoe and Michael McGrath. A €6.7bn package for 2023 had been planned, the date brought forward by two weeks to September 27th to recognise the political pressure for action to address cost of living issues.

However, the European energy crisis has only intensified in recent weeks as Russia has cut off natural gas supply. Irish CPI inflation is now likely to enter double-digit territory in the coming months, following the news Electric Ireland and SSE Airtricity have announced price hikes that will bring the average household energy bill to over €4,000 from October 1st.

This may only be the start of the bad news. In the UK, The Office of Gas and Electricity Markets (OfGEM) price cap is now forecast to rise to a staggering £5,387 for the average household in January. EU leaders are set to hold an emergency meeting on September 9th, intended to ‘decouple’ electricity prices from natural gas, but it remains to be seen if any fresh initiative can be effective in reducing energy bills.

Thankfully, Ireland looks set to run a Budget surplus of €3-4bn this year. This is an envious position to be in, set against government deficits of 4-5% of GDP (Gross Domestic Product) set to recorded European countries and the UK. Hence, the Irish government has more room for manoeuvre and Budget 2023 may announce a range of once-off measures to help this winter.

Nonetheless, Budget 2023 won’t be able to fully compensate households and companies’ finances. There is strong case against going further.

Ireland’s tax take is reliant on potentially volatile corporate taxes. Remarkably, just ten companies now account for over 50% of corporate taxes collected, or €1 in every €8 collected in tax. This is a potential unstable base on which to base spending decisions – especially with a European recession on the horizon. 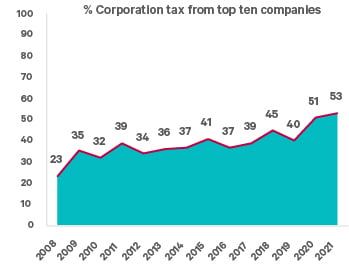 Also, Ireland’s public debt levels are still too high. Finally, there is the risk that excessive government spending will merely chase inflation higher.

What measures may be likely?

Budget-day is always a political exercise and pressure is growing to address cost-of-living issues. So the final Budget 2023 package could well exceed the initial €6.7bn that had been originally planned.

The Summer Economic Statement (SES) had indicated €1bn would be allocated for income tax cuts. These funds likely will be allocated to raise income tax bands in line with inflation. For example, raising the thresholds at which the 40% income tax rate is applied by €1,500 would cost €340m. Some cuts to USC rates may also be likely.

However, the possibility of a new 30% income rate for middle-income earners looks to have been shelved. This would require significant structural change to the tax system and raise thorny issues around tax relief on pension contributions.

The SES also allocated €3bn to meet the cost of maintaining existing public service levels and pre-existing commitments. This includes the cost of the new public sector pay deal. However, the Irish Fiscal Advisory Council (IFAC) has drawn attention to the extent of cost inflation in construction. This could threaten the delivery of the National Development Plan (NDP) without additional funding.

This leaves €2.7bn to be allocated, but the lion's share will likely be spent to help households with cost-of-living issues. Proposals to raise all social welfare payments by €15 per week, including jobs benefit and the basic state pension could cost €1.1bn.

There is also a panoply of proposals for a range of special payments this winter; an autumn social welfare bonus payment, or doubling of the household benefits package, or child benefit, for one month. Similarly, a second €200 electricity credit has been mooted.

However, there will be a clear tension in Budget 2023 between politically popular measures aimed at ‘one for everyone in the audience’ and those most effective in protecting the most vulnerable households from higher energy bills.

Worryingly, the Irish Fiscal Advisory Council (IFAC) has also estimated that 90% of supports implemented so far to meet the cost of living issues have not been targeted at the lowest income groups.

Business groups have also called for support to help companies struggling with higher energy bills. However, there are few concrete proposals so far – no doubt hindered by the potential enormous scale of the challenge.

Housing remains a touchstone political issue. There is now growing acceptance that the exodus of small buy-to-let landlords is creating real difficulty in the private rented sector. So some measures aimed at stemming the flow may be implemented. Rowing back on rent controls isn’t on the agenda. Instead, tax reliefs for landlords or various kinds, perhaps on capital gains may be implemented of various kinds.

There has also been speculation of the reintroduction of a rent credit for tenants. The Help-to-Buy scheme will also likely be extended into 2023. The generous allocation for social housing provision will remain in place, but the key issue remains delivery. Once again in 2022 local authorities and approved housing bodies look set to fall well short of their targets for social housing construction.

Financial market forecasting is difficult but not futile

Are you playing Russian Roulette with your finances?