Brexit and the impact for Ireland

The UK and Irish economies have always had a close relationship. The possibility of Britain leaving the EU would have consequences for Irish trade, but not as much as in the past.

Free trade between Ireland and the UK has always been important to the Irish economy. In 1928, the interdependence of the two economies was acknowledged by the creation of a new currency, the Irish pound. Its exchange rate with sterling was fixed at parity. The significance of the economic relationship was one of the reasons that Ireland and the UK joined the European Economic Community (‘EEC’). That relationship lasted until 1979 when the UK decided to opt out of the European Exchange Rate Mechanism (‘ERM’) which forced a break in the link between the two currencies.

From the outset, Ireland was a more enthusiastic member of the EU. The relationship between the UK and its European partners has always been more strained. It did take two attempts for Ireland to ratify the Nice Treaty and the Lisbon Treaty, but most European referenda in Ireland have passed with large majorities. Ireland joined the ERM at its foundation in 1979 and in 1999 there was an overwhelming majority in favour of replacing the Irish pound with the euro.

The UK also joined the ERM, but its membership did not last long and it was quickly followed by a dispute with the newly elected Conservative government, led by Prime Minister Margaret Thatcher, on the UK’s contribution to the European budget. In 1984, after much disagreement, a significant rebate to the UK was agreed. There has never been any real enthusiasm in the UK for membership of the single currency.

More recently, UK/EU relations have been further strained as the Eurozone crisis has prompted moves towards banking, fiscal and economic union which may require deeper political integration. Most UK political parties oppose any further transfer of sovereignty to Europe. The lack of enthusiasm towards Europe has been best illustrated by the significant increase in support for the UK Independence Party (‘UKIP’) which wants Britain to leave the EU.

To placate his increasingly vociferous backbenchers, Prime Minister David Cameron announced a new European strategy in January 2013. He proposed a more flexible, adaptable and open EU and promised that, if re-elected, the Conservative Party would hold an in/out referendum on EU membership in 2017.

How likely is a British exit, or a ‘Brexit’?

In order to answer this we must first ask how likely is it that a referendum will be held. And if one is, what is the likely outcome? A referendum is only guaranteed if the Conservatives achieve an overall majority in the general election on 7th May. Current polls suggest this is unlikely.

But even if a referendum takes place, recent opinion polls suggest that around 45% would vote to remain in the EU with 35% against. This is almost an exact reversal of the polls taken when the referendum was first mooted in 2013. Moreover, if the referendum takes place after a renegotiation of Britain’s relationship with Europe and there is a positive recommendation from Prime Minister David Cameron, the polls indicate the majority in favour of remaining in Europe jumps to around 55%. 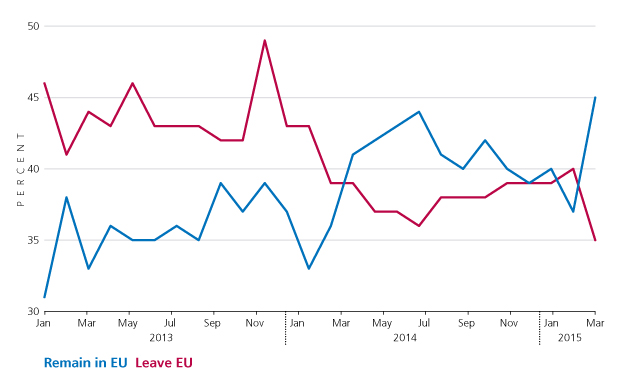 What would the impact of a Brexit be?

Although the probability of a British exit from the EU seems low, it is worth exploring what the consequences would be if it were to happen. They depend on the new relationship between the UK and the EU after the exit.

It is likely that the UK would form a relationship with the EU similar to the relationship already in place between other countries outside the EU, including Switzerland, Norway, Iceland and Liechtenstein. They have formed a European Free Trade Association (‘EFTA’) for the promotion of free trade and economic integration. Norway, Iceland and Liechtenstein have a joint European Economic Area (‘EEA’) Agreement with the EU while Switzerland has signed a set of bilateral agreements with the EU.

If the UK set up a similar arrangement the implications for the Irish economy would be small. As the UK is not a member of the Eurozone, the currency situation would remain unchanged and there would still be free movements of goods and services. Renewed border controls between the Republic and Northern Ireland seem a very unlikely prospect.

Links between the two economies are still very strong

However, if the new relationship between the UK and the EU changed dramatically and trade barriers and tariffs were erected, then the consequences for the Irish economy could be significant. The dependence of the Irish economy on the UK has fallen in recent decades, but it remains an important trading partner.

The true importance of the UK economy as a trading partner is understated by these figures. A significant portion of the growth in exports to the US and mainland Europe reflect the operations of the multinational sector where the real value added is diluted by transfer pricing. In contrast, a much higher proportion of exports to the UK are from indigenous Irish industries where the real economic value added is considerably higher. Perhaps a better indicator of the economic relationship between the two economies is the fact that more than one-third of Irish imports come from the UK.

Are you playing Russian Roulette with your finances?

Can the US dollar keep smiling? - Remaining front and centre